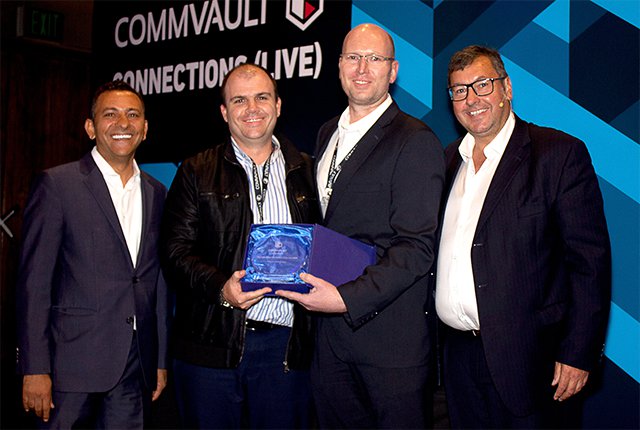 Data Management Solution specialist, Gabsten Technologies, won the prestigious Commvault Services Partner of the Year 2018 award at the Commvault Connections Live event held at the Hyatt Regency in Rosebank on Thursday 30th August 2018. The award pays homage to Gabsten Technologies’ longstanding partnership with Commvault, and its excellence in implementing, supporting, managing and servicing Commvault solutions within the Sub-Saharan region.

Says Dreyer, “An event of this scale in South Africa highlights Commvault’s commitment to local partners and customers, as well as its investment in growing the local market.”

The event focused on Commvault’s reinforced partner and customer engagement model which seeks to simplify and streamline the process, making investing in Commvault solutions far easier. In addition, Commvault gave insight into ways in which these products could improve efficiency, save costs and deliver more value to businesses.

Commvault’s Vice President of Technical Services for EMEA, Mark Jow, and Area Vice President for MESAT Commvault, Wael Mustafa, concluded the event with an awards ceremony. The final award was Services Partner of the Year, which Dreyer accepted on behalf of Gabsten.

“We are honoured to receive this award, which recognises our efforts and contributions to help grow and sustain the Commvault brand in South Africa for the past nine years. We are consistent in putting our customers first and helping partners to implement and support Commvault solutions and it is wonderful to have this consistency acknowledged,” adds Dreyer.

Many of the awards were in recognition of sales efforts and technical capability, with one of Gabsten Technologies’ own engineers receiving a CVCSA Systems Engineer certification.

Handing out the awards, Mark Jow had this to say of Gabsten Technologies, “I have had the pleasure of working alongside Gabsten for the past eight years or more. As a new company, we initially took a leap of faith in trusting them to be our services arm in South Africa – a leap which has more than paid off.

“Gabsten Technologies is one of the most active, engaged and experienced services partners not just in South Africa, but across the globe. We are immensely honoured by, and proud of, their continued faith in Commvault and their commitment to our value proposition.”